Opt Out and Overturn UNCONSTITUTIONAL Open Primary on Sept 18!

Anil's Story:
Friends, I grew up living in the overwhelmingly Democrat city of Philadelphia, with my entire family as followers of the Democrat Party, I was opposed to the destruction of the city by a worthless party and sought relief. Imagine, in the city of Independence of our Great Nation, yet for decades the city and its residents rejected those documents and today you have the communist hell of Philadelphia, averaging 1.3 murders a day. Communist democrat policies failed yet was there another way?  Yes, what the city was famous for was the way forward to make our nation great!  Our Great Declaration of Independence and American Constitution!

At 18 years old, with a better understanding of our Constitution, I learned about the Republican Party through its platform.  What an amazing document, of solid conservative (social and fiscal) principles that aligned with our US Constitution. I registered as a Republican!  I saw the failure of appeasement and democrat policies and how it destroyed most communities especially the black sections of North and West Philadelphia. I decided to emancipate myself from these failed political policies and my political freedom was supported by the documents I mentioned above.

Yet through the decades, the Republican Party left its Conservative platform and greater, our American Constitution.  I moved to Colorado in 2010 and could not believe how watered down the party became.  I ran to be a National Delegate for Rick Santorum; a miracle happened and I went to 2012 Republican National Committee.  More miracles happened (see my roles to date) and I learned a lot about Republican Politics and the corruption here in Colorado.  Nothing happened overnight but the greatest was the failure of the Party to stop non-Republicans from picking Republican candidates in our primary election.

What a travesty to not stop this Unconstitutional law but I didn’t dwell long as I became the first SCC member at the Fall 2017 COGOP Meeting to try to stop this madness with a motion to sue to overturn Open Primary in federal court.  Why? Because it was UNCONSTITUTIONAL! It was a rejection of my First Amendment Right to free speech through a Private Organization, to peaceably assembly with a Private Organization, and to adequately petition the government with true Republican candidates picked by Republican Voters only.   When my motion failed by a 2/3’s voice vote in the fall of 2017, I sat ashamed that my party failed to stand for the Constitution and our Conservative Republican Platform.  What good was the party anymore?  I predicted in 2017 that the COGOP has 5-7 years before it goes extinct. And here we are about to die off unless we Opt Out of Open Primary and also Sue to Overturn UNCONSTITUTIONAL OPEN Primary in Federal Court ASAP! 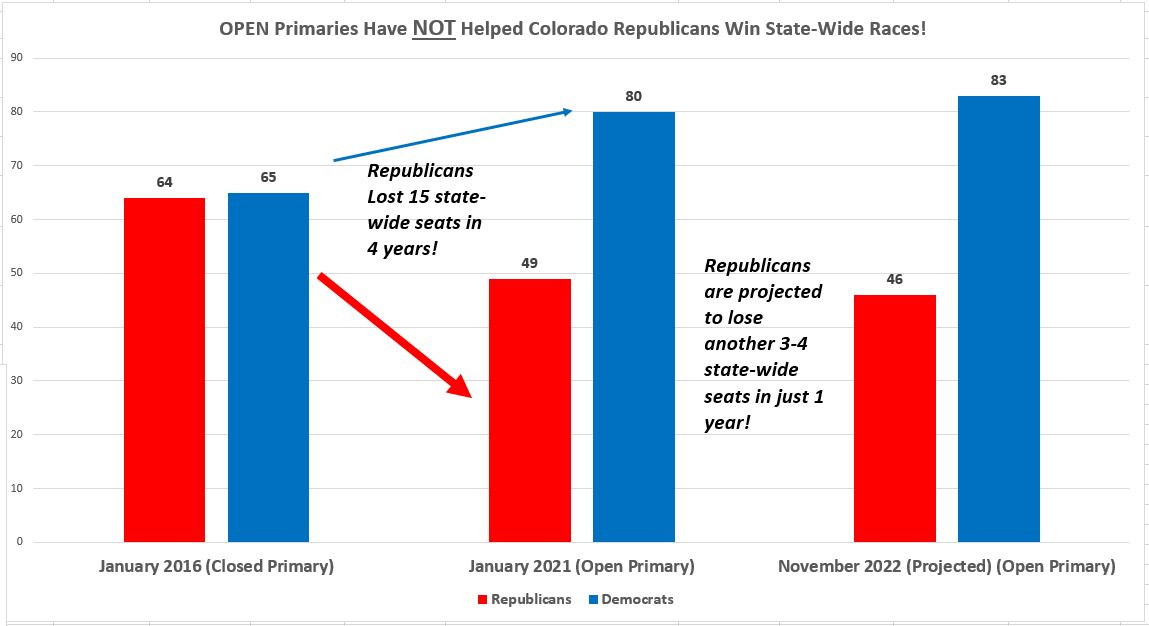 Since Open Primary (in 5 years), Colorado Republicans have

The simple fact is: Republican voters don’t trust us!  Voters don’t trust us!  We have failed to stand for our Constitution and Conservative Republican Platform! We have lost our moral authority and sellout to the highest bidder!  And over the last few weeks, our opponents (non-platform and constitution supporting; pro-dark money, consultants, RINOs) continue with their non-facts-based rhetoric supporting this madness saying “we are at the cusp of victory” (losing 5 straight years) and we will “offend UAFs (Non-Republicans)” (60-70% of UAFs vote Democrat).

Why haven’t they told you the facts to date about the failure of “Open Primary”? What’s in it for them?  A great nation or a great pocketbook? Are we still living the Stockholm/Spousal Abuse Syndrome believing their lies?  The data above and the graphs below show we are almost done as a party in 2 years IF we do not stop Open Primary!

In conclusion, I became a Republican because of our great Constitution and our Conservative Republican Platform (social, fiscal, etc.) and I will continue to fight for these documents.  Will you join me?  What good is a Republican if they can’t fight for these documents?  They are no good!  What will we leave our children and grandchildren? $29,000,000,000,000+ in national debt and other travesties or a great nation of Freedom with our Constitution?!

On Sept 18, we will have a standing Roll Call vote, so history will know how every SCC member voted and greater, what we truly believe!  Please join us in abolishing this UNCONSTITUTIONAL Law and return the Private Republican Party back to its Rightful Owners: Registered Republicans!

True Republicans Stand with Our Constitution and Conservative Republican Platform! Vote to Opt Out and Vote to Overturn Open Primary in Federal Court on Sept 18! Thank You and May God bless you and our Great Nation!