We hereby notify the entire eligible membership of the PCRCC that we are exercising our right via PCRCC Bylaws, Article 5, Section D, Paragraphs 1-4 to formally request the sitting PCRCC Chair, Debra Elsner, be removed from her position.

Accompanying our request to remove the PCRCC Chair are signatures of over 1/3 of the entire PCRCC membership supporting this action, as per PCRCC Bylaws.  See Attachment A below.

By this Notice we are required to notify, in writing, all members of the entire PCRCC fifteen (15) days

prior to the next regular PCRCC meeting. All Notices will be sent via email or hard copy letter in accordance with approved communication methods per the Bylaws.

The sitting PCRCC Chair, Debra Elsner, has earned a “vote of no confidence” as a lead representative of the Republican Party in Park County.  Per PCRCC Bylaws, Article 5, Section B, paragraph 1.c, the duty of the Chair shall be to “Observe and enforce the bylaws and rules of the PCRCC”.   Also, PCRCC Bylaw, Article 2, paragraph 1-4 states:

The principal purposes and objectives of PCRCC shall be:

It has come to the attention of the PCRCC membership that the sitting PCRCC Chair has publicly and actively campaigned for the Democrat Candidate, Ashley Girodo, who is running against the Republican Candidate, Dave Wissel, for County Commissioner in District 3.

The following examples highlight the Chair’s dereliction of duty:

It is a further dereliction of duty according to the PCRCC Bylaws, Article 3, Section B to endorse, support or oppose a Republican Candidate before the Primary Election:

Our local Republican Party deserves a PCRCC Chair who will privately and publicly support and endorse our elected Republican Candidates and not actively campaign for the opposing Democrat Candidates. The County Commissioner seat is a critical position in Park County and if it goes to a Democrat, with the support and endorsement of Debra Elsner, the PCRCC Chair, and County Commissioner Dick Elsner, it will dramatically move our County away from the Conservative values we hold dear.

To avoid further harm to the Republicans of Park County, we call for Debra Elsner’s voluntary resignation as PCRCC Chair to be sent in writing to the entire PCRCC membership by Tuesday, September 6th, 2022.  If Debra Elsner refuses to voluntarily resign as PCRCC Chair, the process to remove her per PCRCC Bylaws will proceed.

As per the PCRCC Bylaws, Article 5, Section D, paragraph 3, all reasons for the request to remove the PCRCC Chair will be aired at the next scheduled PCRCC meeting on Wednesday, September 14th. The PCRCC Chair will have the opportunity to speak for as long as she deems necessary.  Upon completion of the Chairs comments, a vote by ballot will be taken.  This letter also serves as a request to add this Notice and subsequent vote to remove Debra Elsner, as the PCRCC Chair, to the PCRCC agenda on Wednesday, September 14th, 2022.

Attachment A:  List of 1/3 + of PCRCC Members supporting the removal of Debra Elsner as PCRCC Chair. 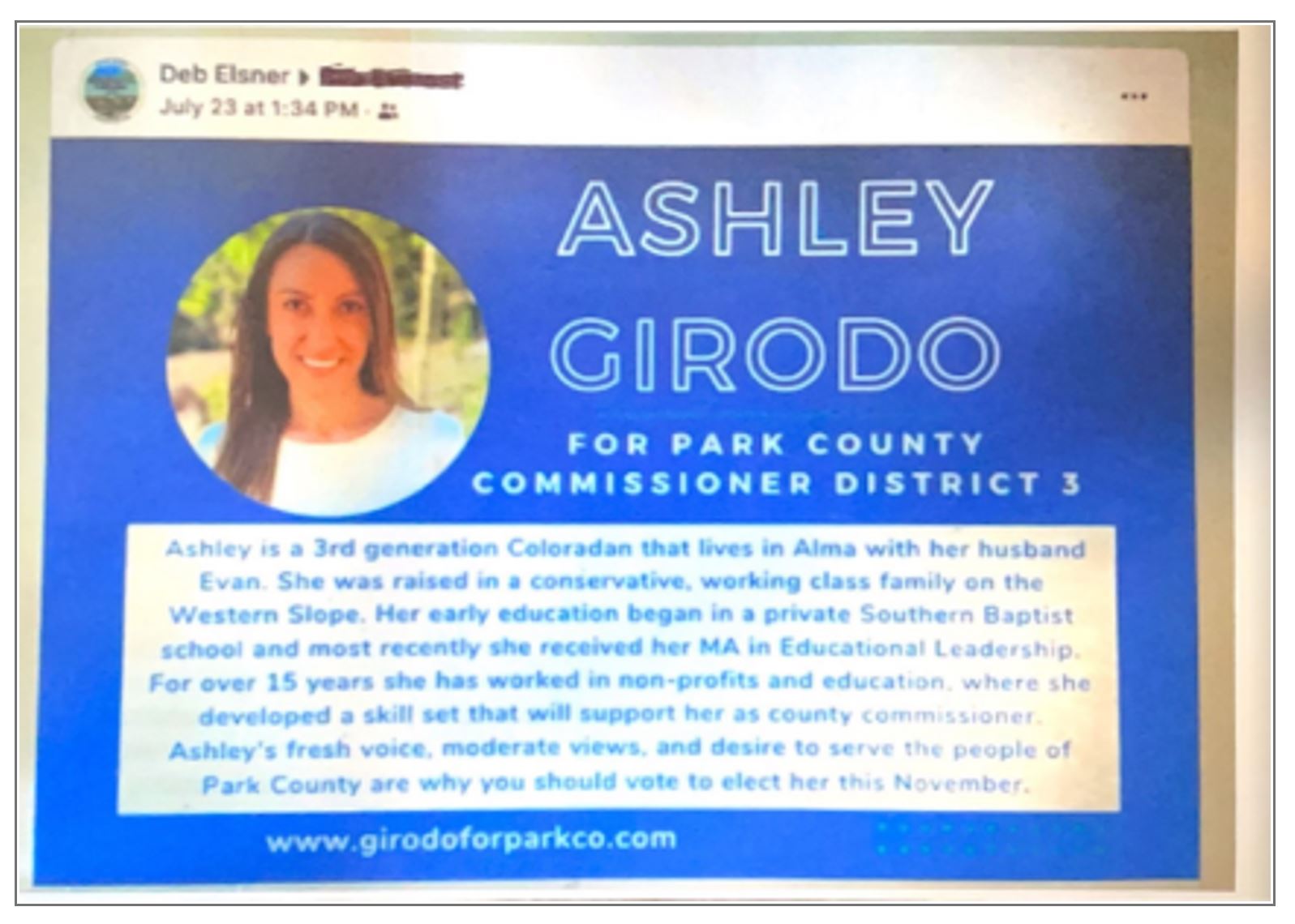 Below is my recollection of what transpired at the Aug 15, 2022 meeting of the Park County Livestock committee meeting held at the Shawnee community center.

When the committee chair adjourned the meeting,  I got up to leave and noticed that their were fliers for Ashley Girodo,  running for Park County Commissioner. The fliers were on a table in front of Dick and Deb Elsner.    When I walked by they asked me to take a flier, and I said no.    Dick said we need to do what's best for Park County.     I left after that.

prior to the Primary Election of 2022.

I am a neighbor of the Elsners, and took pictures June 15,

supporting Republican primary candidates as shown in the pics below. The signs

had been posted on the fence on June 14th. 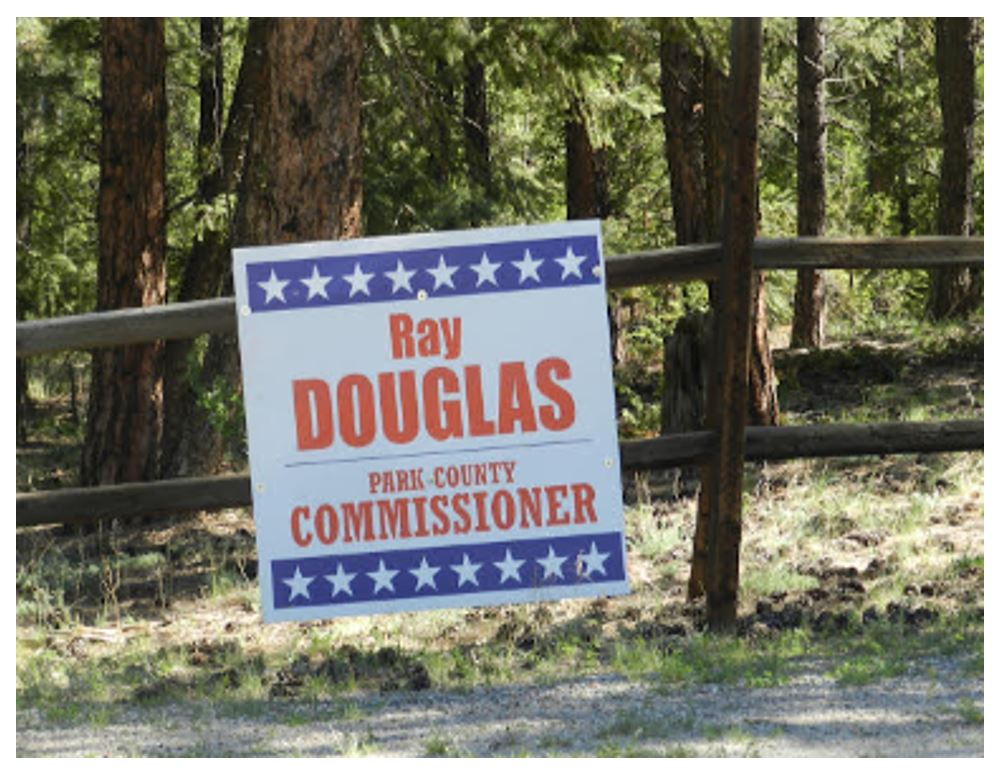 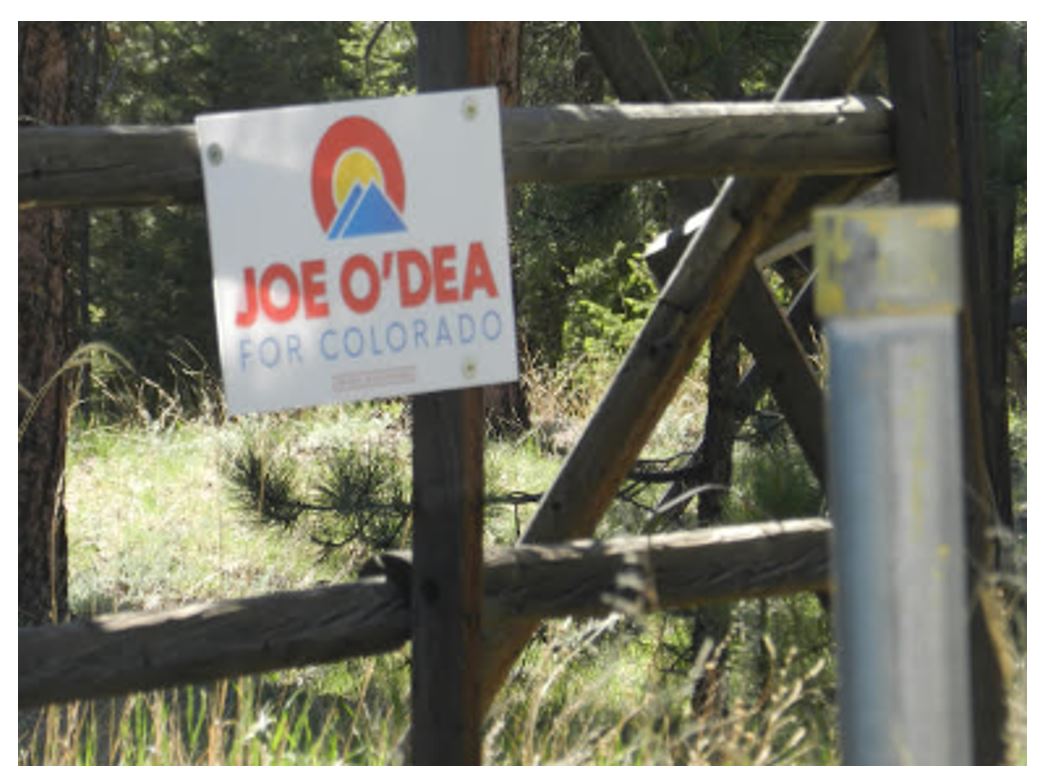 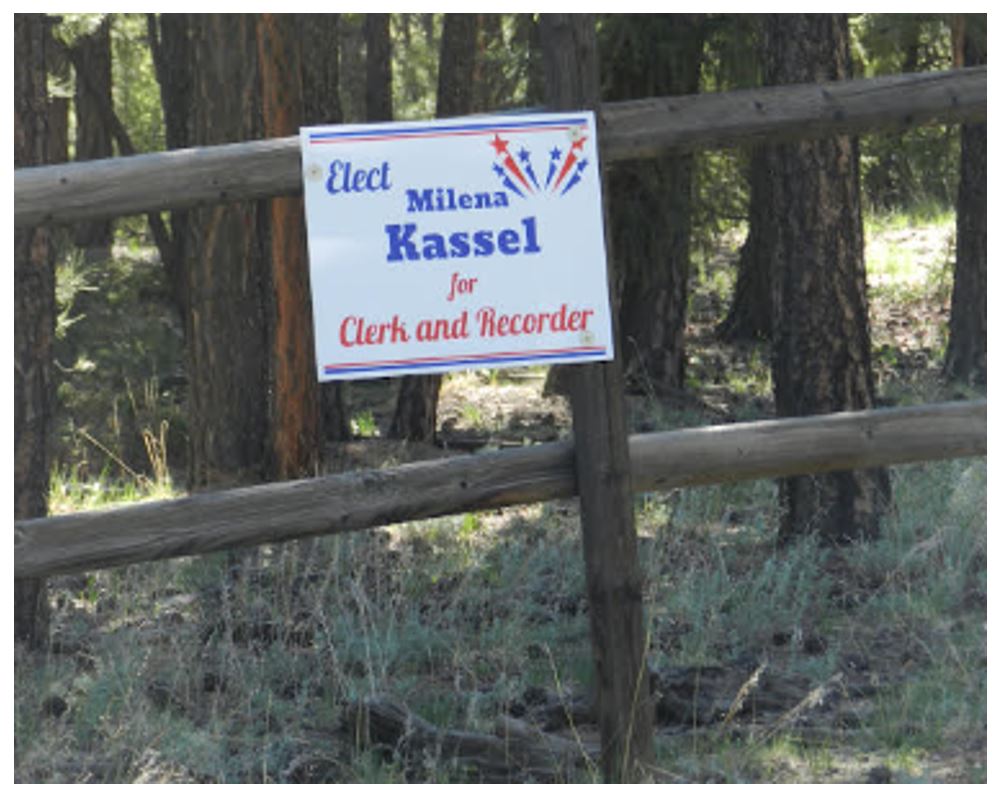