A note from Peg Cage:
The Boulder County Republicans (BCR) once again proved the importance of a strong election integrity team supporting knowledgeable canvass board members. The two Republicans were outvoted on the board by the opposing two Democrat members and the Democrat New Era-trained County Clerk, so the election in Boulder County stands as recorded.

Even when the Republicans and American Constitution Party had the board’s majority with their combined four members, and refused to certify the 2014 election, the Secretary of State ruled that the election stood as recorded. (See Boulder County Canvass Reports From 2010 to 2016.)

So why not just sign the certificate like most canvass board members do? Because it is the legal responsibility of the County Party’s Canvass Board members to verify to the voters that the election’s results could be trusted. That verification could not happen with this primary’s specific anomalies, and I contend that none of Colorado’s all-unsolicited-mail-ballot elections are certifiable. (See Description of Certifying an Election.) 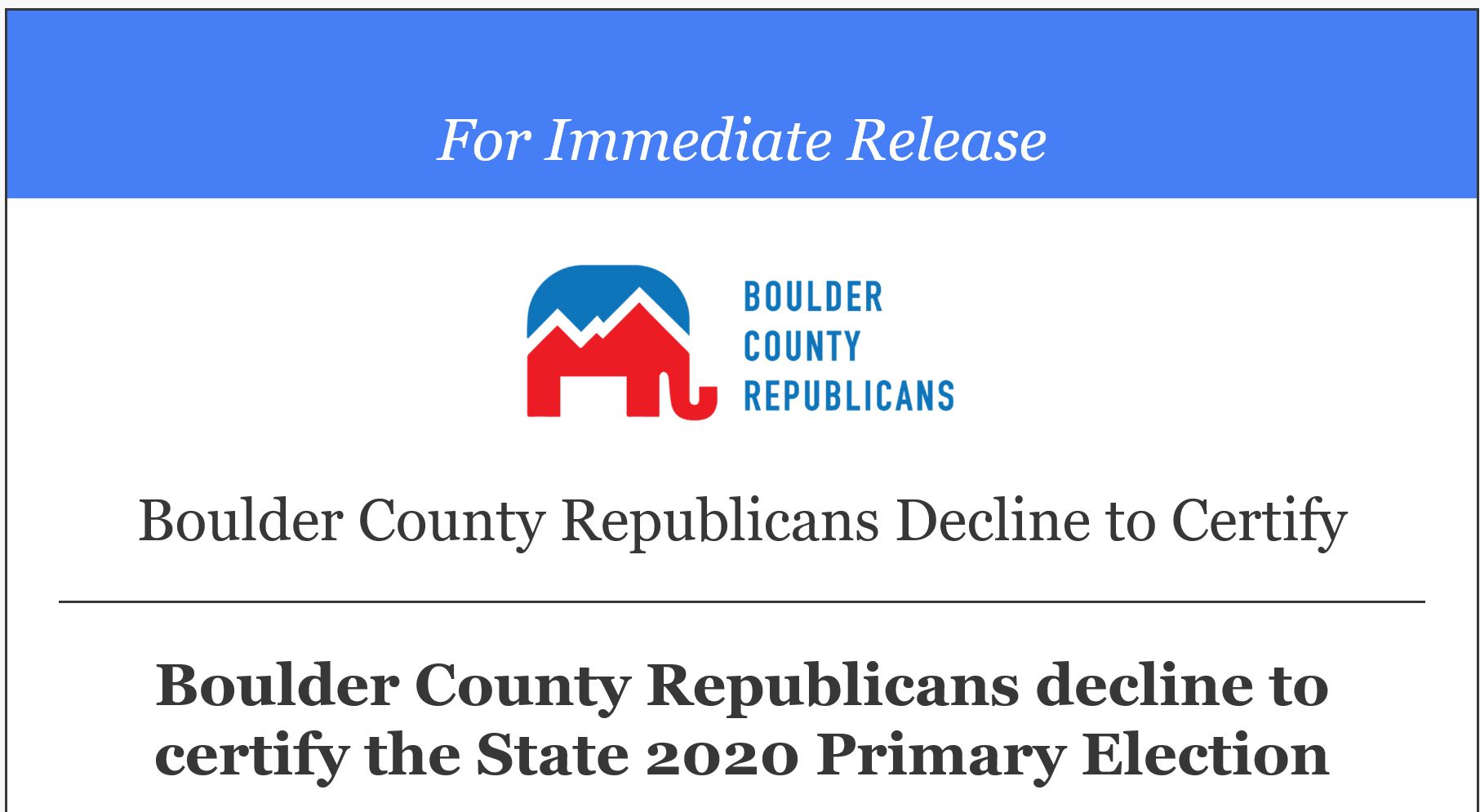 Longmont, CO. -- The Boulder County Republican canvass board members declined to certify the State 2020 Primary Election. Board members cited the County Clerk’s inability to reconcile signature discrepancies, the destruction of records by Clerk’s office staff, and the refusal to provide backup documentation as reasons they could not certify the reconciliation report.

During a July 15, 2020 two-and-a-half hour session, the Clerk’s office presented the Summary of Votes to the canvass board, yet the number of rejected ballots in the Summary did not reconcile with the documentation obtained through the CORA request. Board members of both parties concurred the Signature Discrepancy Tracking Logs were sloppy, difficult to interpret, and incomplete. The Envelope Accounting Forms appeared to have been altered since their creation by bipartisan election judge teams. It was discovered via the CORA request that the Ballot Batch Logs had been destroyed and were unavailable. In response, Deputy Clerk - Elections Coordinator Justine Vigil-Tapia argued the Ballot Batch Logs are “just pieces of paper”.

When Republicans suggested other documents, such as the Cure Letter Logs, could potentially reconcile the Summary, Clerk & Recorder Molly Fitzpatrick called for the vote to certify.

Theresa Watson, Chairwoman of Boulder County Republicans, has closely followed the signature verification process during the last three elections and said, “I am extremely disappointed that Boulder County, frequently touted as the gold standard for elections by the County Clerk and Recorder, was unwilling to provide reconcilable records. Voters need to trust that our elections are conducted correctly and fairly. Furthermore, it is the canvass board’s duty to ensure that the voting process is accurate. Yet without the records to reconcile the votes it is impossible for them to assure voters’ intentions, of all parties, are accurately represented, and that no one is disenfranchised due to shoddy practices.”

The canvass board consists of two representatives from each of the two major political parties and the Clerk & Recorder. The board reconciles the ballots cast in an election, and verifies that the number of ballots counted does not exceed the number cast. In the event incomplete documentation is provided, Colorado law empowers board members to request additional materials to verify the Clerk’s claims. A simple majority among the board members constitutes a certified election.

No Republican candidates ran contested primary races in Boulder County. Democrats had a primary race determined by a 4% difference.

Boulder County Republicans | Longmont CO | This email address is being protected from spambots. You need JavaScript enabled to view it. | www.bocogop.org