No table cloths.  Tellers remain seated until finished, with hands visible on the table at all times.

Procedure:
Each Eligible Delegate for CD 8 received, upon check-in by the Credentials Committee, 6 different colored ballots (index cards), stapled together.

Once Chairman Mathai opened voting, members of the Teller Committee manned the CLEAR ballot boxes, allowing only Delegates who showed their CD 8 Delegate badges to drop a ballot into the box.

A member of the Teller Committee took a ballot box to the people who were unable to bring their ballots to the front.

When Chairman Mathai closed voting, two Teller Committee members carrying the two CLEAR ballot boxes accessed the stage via stairways within view of the Delegates, and put the ballot boxes, one at a time, on a table on the stage.

Two people from the Teller Committee removed the ballots from the CLEAR ballot boxes and divided them as evenly as possible between three CLEAR medium-sized containers.  The large Ballot Boxes were placed on the stage within view of the Delegates.

One of the three CLEAR medium-sized containers, each now full of folded ballots, was placed in the center of each of three tables.  Each table had sitting at it two teams of three; one team on either side of the table.

The Counting Process:
With all teams beginning simultaneously at the signal of the Teller Chairman, the center person of each team pulled one ballot from the medium container and read the name on the ballot.  The other two on his team, one on each side of him, kept separate tallies, by making one mark on the form provided by the Teller Committee.  When one of the members marked a group of five on the sheet, they would announce “tally.”  After reading the ballot and confirming the tally markers had marked them, the center person put the tallied ballots in a small clear container.  Ballots were not set on the table; they went directly from the medium size container to the small container, with only the center person touching the ballots.

When the medium container was empty, both tallies from each team needed to match.  Also, each team’s center person counted the ballots out loud, with his teammates counting along.  When they all agreed on the total number of ballots in that batch, the number of ballots should be written on the team’s tally sheet.

If the two tallies on one team did not match, their batch of ballots was recounted.

Candidate’s Watchers:
Were allowed to sit at the ends of the tables, an arm’s length away, or walk around the tables, staying an arm’s length away from the teller members.  The watchers were allowed to request team members speak louder or show the ballots more clearly, if necessary. After one warning, the Teller Chairman reserved the right to request a watcher be seated 10 feet away if they seemed to be interfering with the process.

Forms that were used: 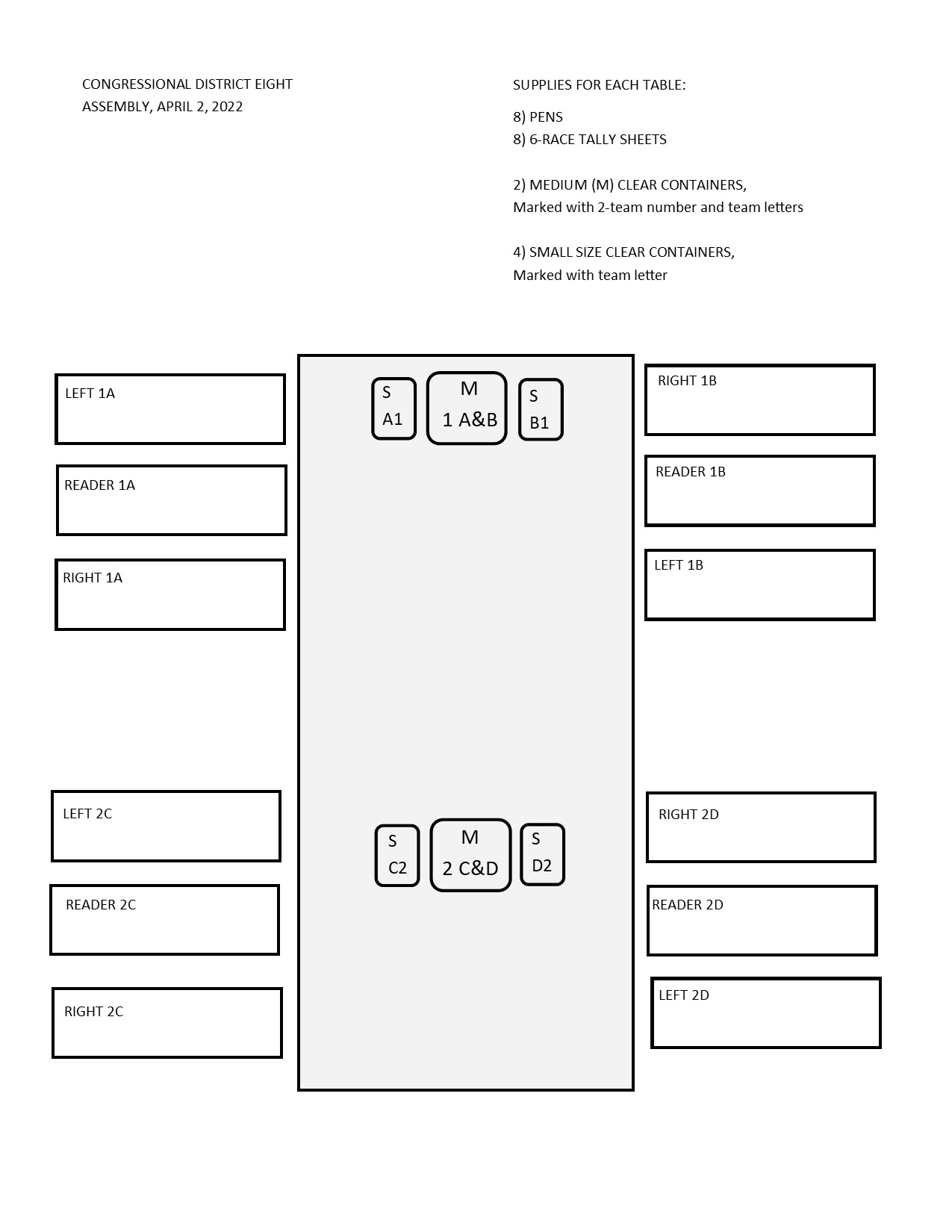 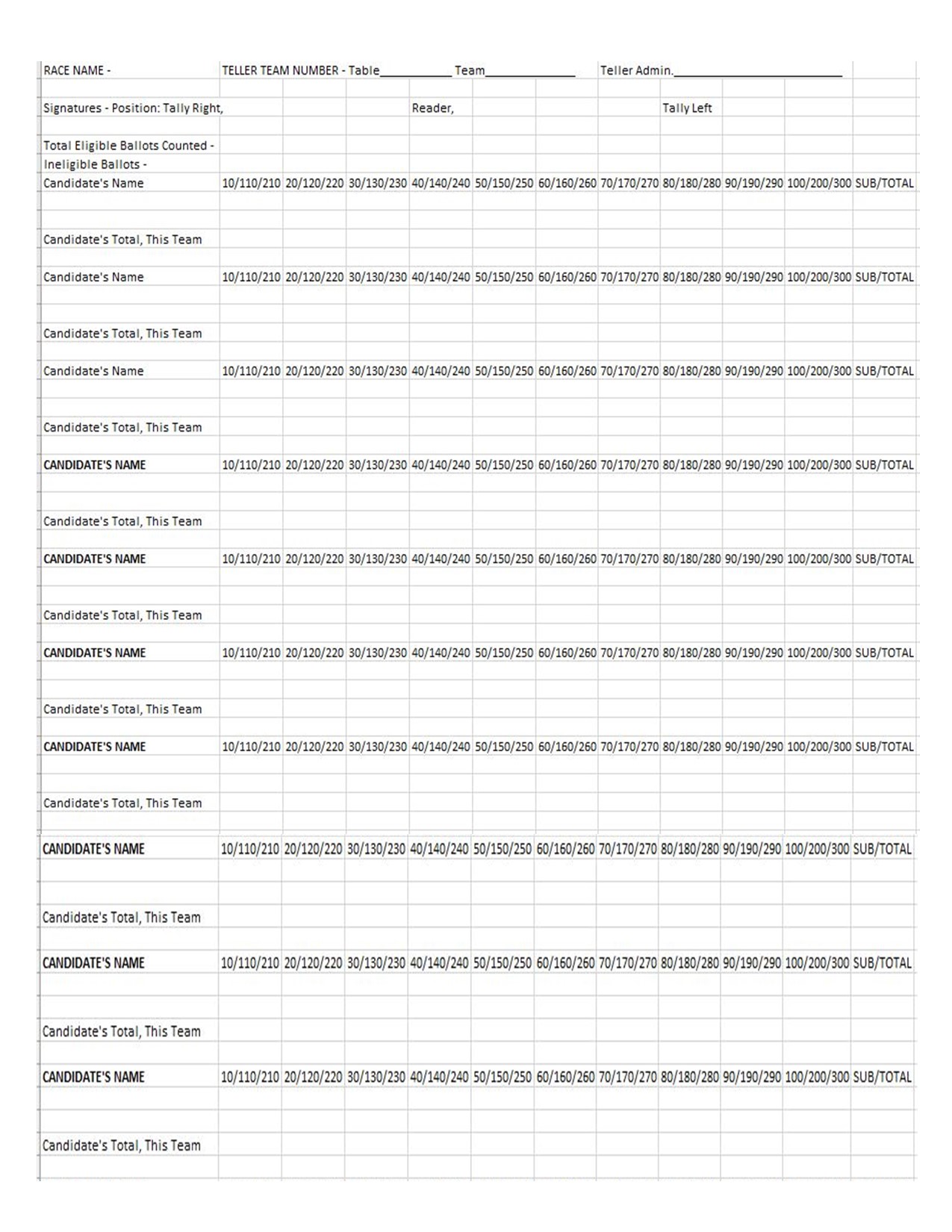 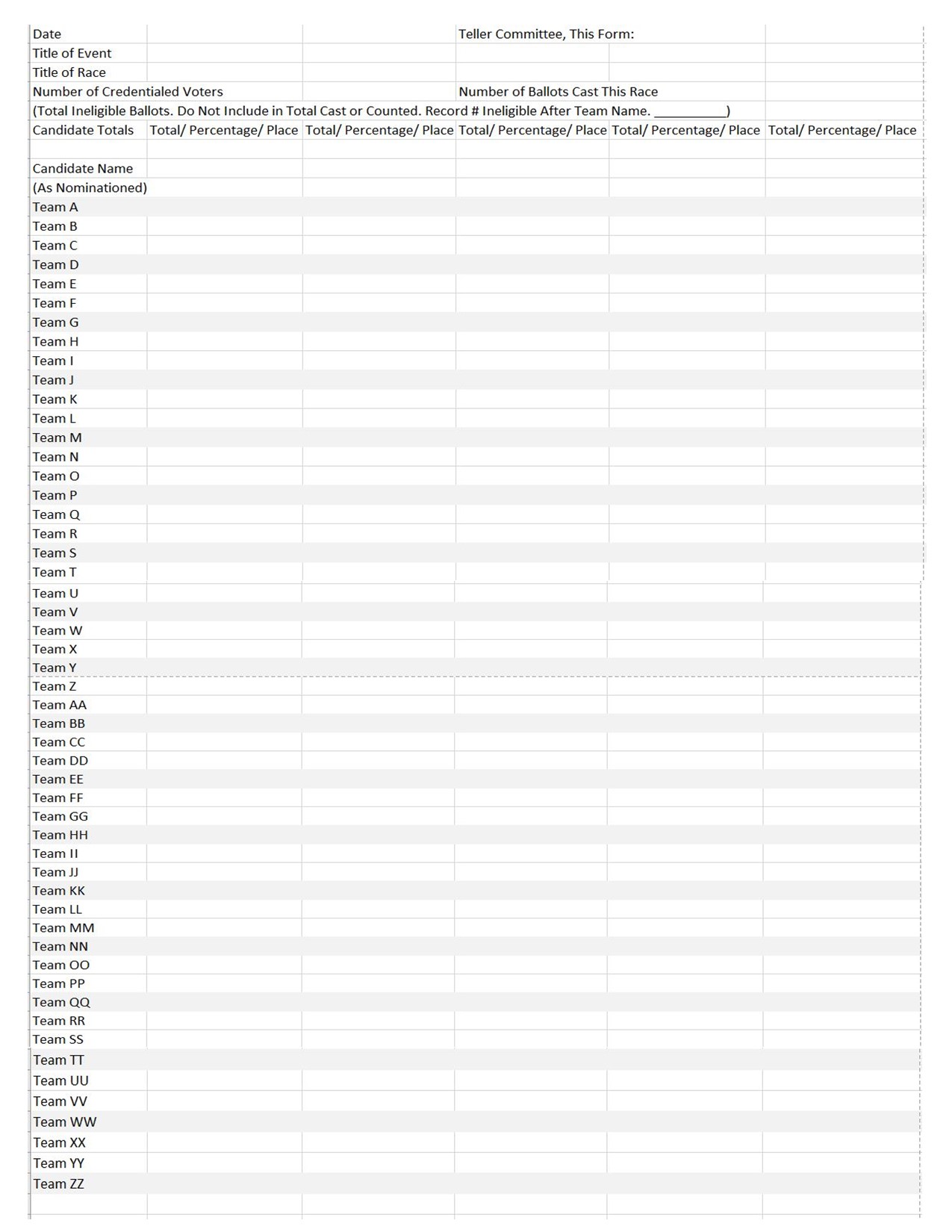