They can run but they can’t hide anymore.

Did you see the email that exposed Greg Brophy as a Democrat donor?  (Below)

As shocking as it sounds, former Republican Senator Greg Brophy actually gave money to a radical-left Democrat and endorsed against a Republican, Stephanie Luck.

Thankfully (and no thanks to Sen. Brophy), Luck won her race anyway and we gained a strong Republican in the State House.

After seeing the email about Brophy (see below), it was necessary to keep digging to see if there are any other bad actors in the “open primary” movement, because hopefully this is not a trend.

After all, these are the people who want to make it easier to allow Democrats to spend millions of dollars manipulating our elections!

And guess what was found out. . . Senator Brophy isn’t the only open primary supporter with strong ties to radical Democrats.

Jon Caldera, who sent out a letter of opposition to the opt-out of the rigged open primary system, is an unaffiliated voter who left the Republican Party in May of 2018.

But, if leaving the GOP wasn’t bad enough, Caldara is actively working to elect Democrats.

Peg, the deeper you look, the worse it gets. Based on his voter history, presumably Jon Caldara VOTED FOR (if only in the primary):

Joe Biden for President, Jared Polis for Governor, Joe Neguse for Congress, and some of the most radical Democrats in our State Legislature, including State Democrat Leader Sen. Stephen Fenberg and left-wing wack job State Rep. Edie Hooton.

Check out his voter history for yourself: 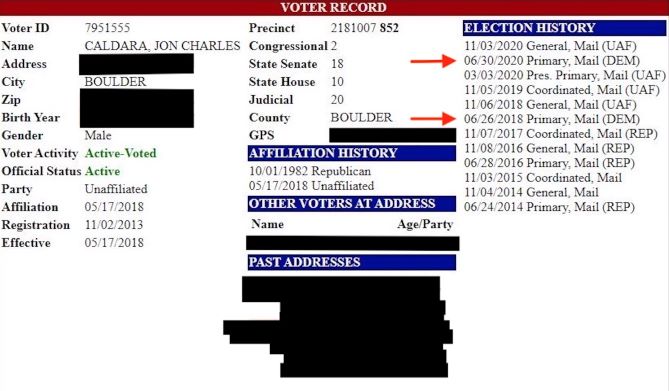 Why should we as Republicans trust someone like this? This is like letting a wolf live freely in your hen house and being confused about why all of your chickens are dying.

It’s clear Democrats are not only invading our primaries, but they are now attempting to sabotage our inner-party workings.

More research needs to be done by CRC members like you and me to expose more of these Democrats in disguise.

Jon Caldara and Senator Greg Brophy are just two examples of open primary supporters not disclosing their financial or political interest in maintaining the status quo of losing essential elections that have caused Colorado to become as BLUE as states like California or New York.

We need to ask ourselves, who gains the most from keeping open primaries? The answer is simple, Democrats and their turncoat GOP allies like Caldera and Brophy.

I think you’ll agree, we shouldn’t give these fake Republicans a pass.

We all have our unique opinion on this issue. Still, those in political power should disclose their financial or political interest when advocating for unsecure open primary elections – especially if they actively support Democrat opponents and work against us in our primary elections.

Subject: you going to let this slide?

There's something that needs to come to light… our membership deserves to know the truth.

He believes the best way to support “Republican efforts” is to keep allowing Democrats to spend millions in dark money to pick our nominees in open primaries.

Unfortunately, it’s not surprising if you do the research. Greg Brophy supported and donated to an incumbent Democrat for reelection twice in the 2020 election cycle against our Republican nominee.

The Democrat’s name was Bri Buentello. She represented a swing district in Pueblo and supported 99% of the radical Democrat agenda crafted by far-left Denver and Boulder Democrats.

Before they terminated his lobbying contract, Greg even hoodwinked the NRA into endorsing the Democrat against our Republican nominee.

Well, guess what? Our Republican nominee, Stephanie Luck, won the election anyway despite Greg’s interference… and now she is one of our best and most effective Republican lawmakers.

However, if Senator Brophy had it his way, this tremendous REPUBLICAN VICTORY would have never happened.

Just so you know, Stephanie, the only Republican nominee to flip a Democrat seat in a swing district during the 2020 election, supports the opt-out.

So, the next time you receive an email from deep-pocketed political insiders like Senator Brophy, ask yourself: “What is their real agenda, and how are they benefiting from this?”

It seems to me, their plan is clear -- to benefit the radical Democrats that hold power instead of our great Republican Party.

I urge you to please vote to opt-out of the broken open primary system. We must stop the lies and dirty politics. Our state is too valuable not to.