We’ve all heard the maxim about history repeating itself. Given our current political conditions not only here in Colorado, but in the US writ large, it is perhaps apropos and telling that this quote can be attributed to Karl Marx.

That our recent political history continues to repeat itself so predictably every two-year election cycle, what we really have is a broken record. And like a broken record, it has become maddening and requiring of intervention.

The problems (read: fraud) that happened in 2020 were repeated in the 2022 primaries and midterms in Colorado. The results for many races (statewide and local) defied statistical probability; some data scientists say they defied statistical possibility given the randomized nature of human behavior. But the point of this paper is not to restate or analyze the results, the statistics, or science behind the election data analysis. This paper examines the actions and inactions of government officials and party officers involved in the elections. I’ll use the 2022 cycle as the example.

Whether you believe that our elections have been honest and secure or not, the fact that recounts have been requested, and in some instances, required, is objective fact. And once a recount has been either requested or required, there are certain actions that must be performed according to state law [see CRS 1-10.5-102 (3)]. County elections officials must perform a manual count of the paper ballots (Colorado uses paper ballots according to state law) and compare that result with the results recorded by the electronic tabulators, the so-called “Dominion Machines.” This is not a matter of opinion or interpretation. The law is very clear about this process. County officials are statutorily obligated to do this before performing a recount. But they don’t.

They don’t follow state law because Secretary of State Jena Griswold tells them not to. Jena Griswold issues the County Clerks a set of instructions that misrepresents state law by reinterpreting what the statute says and changes words to make it look like using county generated test ballots is what the law requires. Not only is this false and disingenuous, this is illegal. Jena Griswold is instructing county officials (including the elected county clerks) to break the law—this makes them all guilty. No one can order another to break a law. That’s called an illegal order. Those who issue the illegal order as well as though who obey such an order are all guilty of the same crime. And before you start to think that the clerks are victims here, they are obligated to know election laws—it’s part of being an election official. Besides, we made them aware of CRS 1-10.5-102, but they chose to obey Jena and ignore statute.

These matters have been brought to several different courts in Colorado, all of whom refuse to hear the cases. Colorado courts dismissed these petitions on the grounds that they (the courts) did not have jurisdiction over the matter(s), because the elections/recounts were over. This is like a court saying that it doesn’t have jurisdiction over a murder case because the victim is already dead. The courts did not opine as to the matter of statute or the clerks’ and secretary’s legal obligations. They only said that it was too late for them to exercise jurisdiction. The judicial branch has effectively excused itself from the matters of elections. The courts, by default, have effectively said, “The Executive Branch is the sole and final authority on elections. Whatever they say goes. Whatever they say are the results are the results no matter how they were determined. We have no responsibility here. Go away.”

Since elections are matters of politics and political process, you’d think that the political parties involved would say something about this. In particular, you’d think that the Republican Party would make its opinion known since all of these recounts involved Republican candidates. You’d think that the Colorado Republican Party would demand that the law be followed in order to assure all interested parties (candidates and voters alike) that the results were accurate and that the electoral process was solvent. We got crickets from the COGOP. It should be pointed out here, that many of the clerks who illegally followed Jena Griswold’s criminal instructions are Republicans—who abused the faith and trust of Republican candidates. The COGOP has an incredible bully pulpit from which to have its voice heard, but they are silent on matters of election integrity or the (un)lawful execution of the electoral process.

Consider that Jena Griswold has (in 2020 and in 2022) sent voter registration invitations to non-US citizens; every county in the state has voter rolls that exceed the population of eligible voters; there is no chain of custody with mail ballots; and last, but not least, open primaries. Our party has a vested interest in the security and proper conduct of elections and any subsequent recount. This means that the COGOPHQ has an equal share in this interest, yet they sit idle as our Democrat Secretary of State orders clerks to break the law…and they obey. We the people at the grassroots level have pushed this issue as far as it can go (all the way to SCOTUS, now) with no support from the COGOP. In fact, it is more accurate to say that we have borne the brunt of the COGOP leadership’s derision for seeking justice and demanding legal elections. Our party officials have no interest in legal or fair elections. They are comfortable with the (unlawful) status quo because they benefit from it. The COGOP represents the moneyed establishment and will not surrender their positions anymore than the Democrats will. What’s the difference between the two? Nothing. They are functionally the same. The ruling class will always protect the ruling class. But we can change this in March at the State Central Committee Organization meeting by electing a new Chairman.  You are part of the solution. You can help us change this broken record. 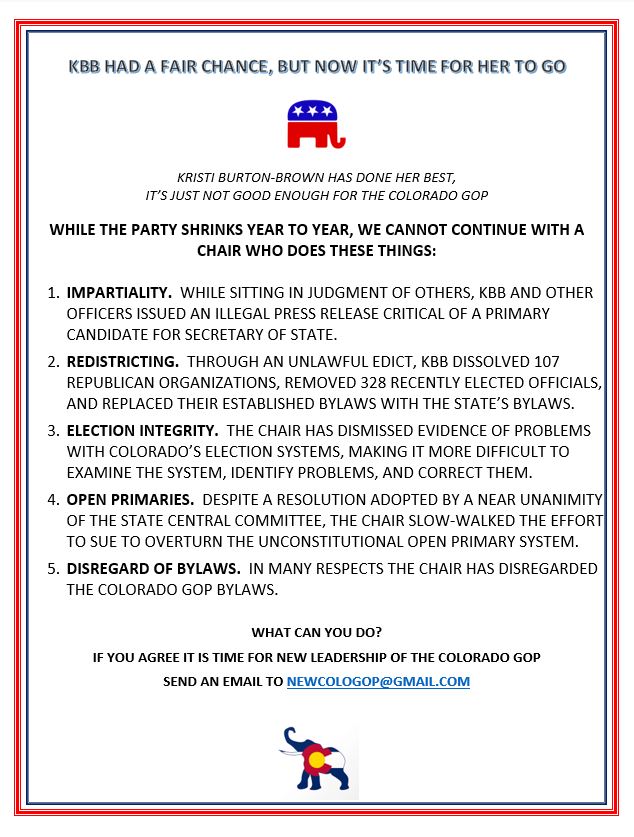 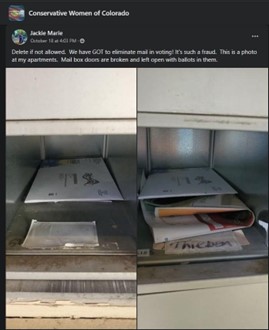 Image of mailed ballots in a broken community mailbox—no doors on the mailbox.
This is illustrative of absent chain of custody of the ballots.